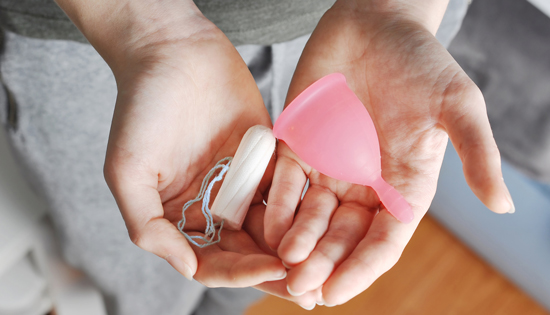 Menstrual pads are the most common products for periods, followed by tampons. But two period products gaining popularity are menstrual cups and period underwear. Both of these are reusable, meaning they eventually pay for themselves and they're more environmentally friendly. But they may require a bit of an adjustment if you're used to pads and tampons. Ultimately, the period product that makes the most sense for you and your lifestyle is best.

"There's no perfect period product for everyone," says OB-GYN Kelsie Cabrera, DO. "It's finding what works best for you."

A menstrual cup is inserted vaginally. It can hold up to 25 mL of blood and stay in place for up to 12 hours. Because it doesn't have cotton or any absorbent material, cups are less prone to infections like toxic shock syndrome (TSS).
Most menstrual cups sell small and large cup sizes. If you have a heavy period, have given birth vaginally or are over 30 years old, you may need the larger size.

How to use: You need to remove the cup at least twice every day, and more often if your flow is heavy. After your cycle, be sure to sterilize the cup using boiling water. If you have a reusable cup, you'll need to remove it before sex.

How to remove period cups:

Period underwear can be worn all day long. It can contain the equivalent of four tampons of flow.

How period underwear works: The underwear has at least three layers: a knitted layer next to the skin, an absorbent middle layer and a final leakproof layer. The level of absorbency depends on the blend of fabrics and the thickness of the underwear.

If the seam side of the gusset is wet, the underwear is full. You'll need a waterproof bag to store your period underwear while away from home.

You'll need at least one pair per day of your period, plus each night. If your cycle usually lasts four days, that's eight pairs. If you do laundry once or only need them for day use, that's four pairs.

How to clean period underwear:

Are irregular periods a side effect of COVID-19 vaccines? Can "vaccine shedding" impact unvaccinated people? Find out here.

You asked, we answered: Why can’t I control when I pee when I have a tampon in?

In some women, placing a tampon in the vagina can actually “unmask” urinary incontinence.

The impact of the COVID-19 pandemic is evident in many ways, including subtle, secondary problems that specifically affect women.