Mastectomies and nipples: What are the options for breast reconstruction? 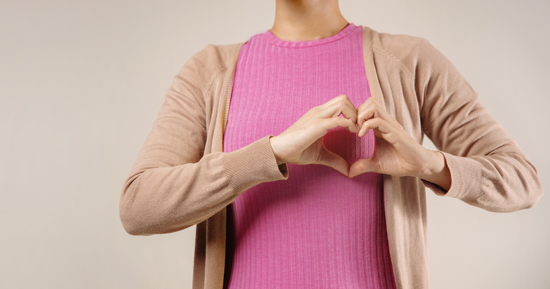 Sensation or feeling in your breasts is important for sexual arousal, partner intimacy and psychological well-being.

Most breast reconstruction options restore breast appearance, but not sensation. Dr. Santamaria says for most mastectomy patients, their breasts will feel numb after reconstruction. "Even though the reconstruction can look great cosmetically, with a good shape, contour and nipple, they won't feel sensation in their new breast."

"In this new procedure, we reconstruct the nerve that supplies sensation to the nipple and the skin around it," says Dr. Santamaria. In the same surgery, Dr. Santamaria preserves part of the nerve, while plastic surgeon Sean Figy, MD, reconstructs the nerve pathway.

"With breast reconstruction, we get to help people heal not only physically, but also emotionally, from the trauma of breast cancer," says Dr. Figy.

Keeping the nipple itself after a mastectomy – called nipple-skin sparing – isn't groundbreaking. But restoring a patient's feeling in their nipple and breast is. "We've been doing nipple-sparing mastectomies for many, many years," says Dr. Santamaria. "What's new is trying to restore the nipple and breast skin sensations, by reconstructing the nerve."

The technical name for this procedure is immediate nipple nerve reconstruction during nipple-skin sparing mastectomy. The goal is to restore nipple and breast skin sensation. Nebraska Medicine is the first and only to offer this service in Nebraska.

What happens to the nipple in a mastectomy?

Who is a candidate for nipple nerve reconstruction?

The location of the tumor matters, if the patient has breast cancer. "If the patient has cancer closer to or involving the nipple, they wouldn't qualify for a nipple-skin sparing mastectomy," explains Dr. Santamaria.

With breasts where the nipple lays lower (medically speaking, greater ptosis), the nipple is more likely to get infected or die after the surgery. The procedure is not recommended for these individuals or those with larger breasts. "The nerve grafts commercially available aren't long enough for larger cup sizes," explains Dr. Figy.

However, people with larger breasts (D cup and above) or a lot of drooping (ptosis) can be candidates for nipple-skin sparing mastectomy. They first need to undergo breast reduction and lift to reduce breast volume and bring the nipple to a higher and safer position. Three to six months later, they can undergo nipple-skin sparing mastectomy, and some will then become candidates for nipple nerve reconstruction. "Larger breasted patients with more ptosis still have hope for nipple sparing and nerve reconstruction," says Dr. Santamaria.

Patients who smoke or who have unmanaged diabetes are not ideal candidates for nipple nerve reconstruction.

People who aren't good candidates for nerve reconstruction can choose from more traditional options. "If the nipple can't be saved, there's a couple of different options for making nipples," says Dr. Figy. "We can either reconstruct the nipple or you can do a 3D nipple tattoo."

Traditional nipple reconstruction is done about three months after your breast reconstruction. Your nipple is made using the skin on your newly reconstructed breast. Your skin is lifted and folded in a way that causes it to project outward, making it look like a natural nipple.

With traditional nipple reconstruction, the new nipple will be hard all the time.

A new areola (darker circle around the nipple) can be made in the following ways:

"Nipple tattoos can look very realistic and cosmetically appealing, but you won't feel anything since there's no innervation," says Dr. Santamaria.

The tattoo artist will try to match the color and shape of your natural areola as closely as possible. The medical name for tattooing is micropigmentation.

Nipple tattoos are safe. "Getting a nipple tattoo will not cause cancer or hide cancer development," says Dr. Santamaria.

A 3D nipple tattoo makes it look like you have a nipple, as opposed to the plastic surgeon creating a nipple. "The 3D tattoo gives the appearance of dimension," Dr. Figy explains. "Even up close, it looks like there's a natural nipple distinct from the colored areola. However, there isn't."

Is breast reconstruction covered under insurance or Medicare?

Most insurance companies are required by federal law to cover breast reconstruction surgery. 3D tattoos, if performed by a tattoo artist and not a health care provider, aren't typically covered by insurance.

"All of these types of mastectomies and reconstruction are usually covered by Medicare," says Dr. Santamaria. You can always meet with our financial counseling services to get cost estimates for procedures.

Options for nipples after a mastectomy

Your breast cancer surgeon and plastic surgeon can help you choose the right procedure for you.

Meet our breast cancer experts
We're the first in the area to provide nipple nerve reconstruction, also called resensation. Call 402.559.5600 to make an appointment with our experienced breast cancer team. 5 facts about breast cancer you may not know

When it comes to preventing breast cancer, knowledge is power. Brush up on your know-how with these five important facts. About a month after a routine mammogram, Tammy Harders felt a lump in her breast. Despite getting the all clear just a few weeks ago, the 44-year-old wife and mother of three remembers thinking, “This one is different.” How to support breast cancer survivors

Whether recently diagnosed or long-term fighters, breast cancer survivors are a powerful bunch. If you have a survivor in your life, you may want to help but don’t know how. These thoughtful ideas are perfect to show your loved one support during a difficult time.