What prebiotics and probiotics are, and the foods that contain them 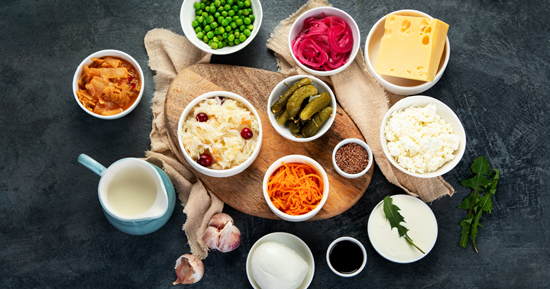 The human gut is home to a diverse collection of microbes, collectively termed gut microbiota. Your gut microbes help regulate digestion, fight disease and even improve your mood. Disruption of the human gut microbiota is associated with gastrointestinal diseases. Both prebiotics and probiotics may support helpful bacteria and other organisms in the gut.

Difference between prebiotics and probiotics

Probiotics are live microorganisms found in fermented food that when administered in adequate amounts provide health benefits. When you eat probiotics, you're adding microbes to your gut.

On the other hand, prebiotics are a type of fiber that the human body cannot digest. All prebiotics are fibers, whereas not all dietary fibers have prebiotic effects. Prebiotics serve as food for probiotics and other beneficial organisms in the gut.

A 2017 meeting of the International Scientific Association of Probiotics and Prebiotics identified prebiotics as "a substrate that is selectively utilized by host microorganisms, conferring a health benefit."

What do probiotics do? Potential health benefits

While a substantial body of literature on probiotics in numerous human diseases exists, the quality of evidence varies. Research on interactions between probiotics and certain diseases is lacking. A 2017 Cochrane review found that taking probiotics while using antibiotics reduced the risk of antibiotic-related diarrhea by 60%. A 2014 analysis of 24 trials found that probiotics could help prevent the life-threatening disease necrotizing enterocolitis in premature infants.

A systematic review of trials in people with irritable bowel syndrome found that probiotics seem to improve the symptoms of this condition. However, the authors caution that it is unclear how significant the benefit may be or which strain of probiotic is most effective. It's safer to consume probiotics through foods, rather than supplements that are not reviewed by the Food and Drug Administration.

Probiotics are available in certain foods containing live cultures such as:

Prebiotics may support a healthy gut by serving as food for friendly bacteria within the gut. They aid digestion and may support the treatment of several chronic digestive disorders. There is less research on prebiotics than on probiotics.

In recent decades, several studies have underlined the health benefits of prebiotics, including:

Prebiotics are found in many fruits and vegetables, especially those that contain complex carbohydrates, such as fiber and resistant starch. Your body can't digest these carbs, so they pass through the digestive system to become food for the bacteria and other microbes and help them do their jobs. To date, no serious side effects have been reported after the consumption of most prebiotics.

Irritable bowel syndrome is a functional disorder, in which microbiota is thought to play a pivotal role. In two studies, no improvement in IBS symptoms was reported after the use of prebiotics. In contrast, an improvement in symptoms was reported in a more recent study, in patients with functional bowel disorders over a 6-week period. Despite these data, evidence of prebiotic effectiveness in adult IBS patients is still controversial. A recent systematic review of randomized controlled trials reported the prebiotic type and dose significantly influenced symptom improvement and exacerbation. As a matter of fact, some evidence suggests higher doses of prebiotics negatively affect IBS symptoms.

Prebiotics are present in fiber-rich foods, such as fruits, vegetables and whole grains. Some good sources of prebiotics include:

An upset stomach is a nonmedical term describing a range of gastrointestinal symptoms like gas, bloating, indigestion, heartburn, nausea, vomiting, constipation or diarrhea.

Can too much vitamin C lead to kidney stones?

The recommended dietary allowance for vitamin C in the United States is 75 mg/day for women and 90 mg/day for men.

IBS or IBD: what's the difference?

If you’ve ever experienced gut issues, you know how frustrating it can be. You may try a variety of things to feel better, but if the discomfort continues, you may worry about what’s really going on.