IBS or IBD: what's the difference? 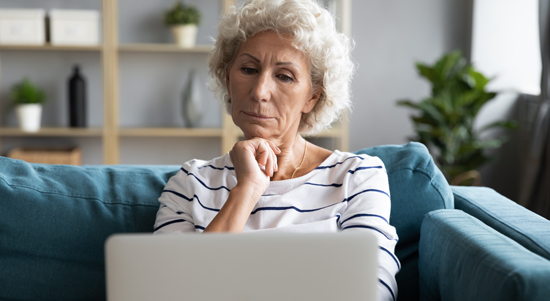 If you've ever experienced gut issues, you know how frustrating it can be. You may try a variety of things to feel better, but if the discomfort continues, you may worry about what's really going on. Do you have irritable bowel syndrome (IBS)? What about inflammatory bowel disease (IBD)? What's the difference?

IBS and IBD are not the same thing

IBS and IBD are two distinctly different gastrointestinal (GI) disorders. While they may share specific symptoms, IBS and IBD are not the same condition. Both affect the gut, but the fundamental difference between them is structural. One causes structural damage a doctor can see during examination while the other does not. Treatments are not the same either, so getting an accurate diagnosis from a doctor is essential.

What IBS is and how it's different from IBD

Irritable bowel syndrome is classified as a syndrome accompanied by a group of gastrointestinal symptoms, not a disease like inflammatory bowel disease. IBS does not cause inflammation and does not mean an increased risk for colon cancer, unlike IBD, which can cause damage to the GI tract and other organs.

IBD shows identifiable mucosal injury and tissue damage that is visible. With IBS, the mucosa – a protective layer which lines the interior of the intestine – is intact without evidence of injury and the integrity of the intestinal lining is maintained.

"With IBS, there is no structural or mucosal damage," explains Derrick Eichele, MD, Nebraska Medicine gastroenterologist. "IBS is more about symptom control, not disease therapy as with IBD. While there are medications that can help, a partnership between doctor and patient needs to be established. Discussing ongoing symptoms, what the patient has tried or not tried and the benefits and drawbacks of medication are important in trying to figure out what works to reduce symptoms."

IBS symptoms and their intensity, can vary between individuals. Symptoms may include:

"Those with IBS do not tend to develop major weight loss due to nutritional malabsorption, anemia or vitamin deficiencies," adds Dr. Eichele. "But if you are experiencing reoccurring bleeding, be sure to talk with your doctor about it. Anemia, bleeding, weight loss and fatigue are symptoms of IBD, requiring special treatment."

It is worth noting that IBS does not lead to developing IBD. The exact cause of IBS is unknown. Diagnosis involves a physical exam, medical history and tests to rule out other GI conditions.

Inflammatory bowel disease and what it means

IBD encompasses both Crohn's disease and ulcerative colitis (UC). Both cause chronic inflammation of the gastrointestinal tract, affect men and women equally and are lifelong conditions. IBD affects nearly 2 million Americans, with as many as 70,000 new cases diagnosed each year. While IBD can occur at any age, diagnosis often begins during the teenage years into the 20s, 30s and beyond. Left untreated, increased inflammation over a long period increases the risk of colon cancer.

"In general, across the U.S. and the world, we see increased incidences of IBD," says Dr. Eichele. "Right now, we treat the immune component to it. We suspect there is some genetic component and environmental factors, but we don't know the exact cause of IBD. We've moved the needle in our treatments of IBD, however, and medical intervention is effective with the goal of reducing and maintaining remission."

How Crohn's disease and ulcerative colitis are different

Crohn's disease
Crohn's disease affects any part of the GI tract, frequently the end of the small intestine and the beginning of the large intestine. The disease may appear in patches, affecting some areas of the GI tract while leaving other sections untouched. Inflammation may extend through the entire thickness of the bowel wall. Crohn's disease symptoms can get worse over time and can also lead to anemia – a lack of healthy red blood cells – due to the malabsorption of nutrients when inflammation involves the small intestine. Crohn's tends to show more weight loss with less rectal bleeding than UC.

Ulcerative colitis
Ulcerative colitis affects only the large intestine (colon). Inflammation occurs only in the innermost layer of the intestine lining. UC occurs in a continuous pattern from the rectum and may involve the entire colon. UC tends to include more bright red bleeding, increased diarrhea and chronic fatigue due to inflammation.

Additional IBD complications may occur along with the above symptoms:

How do I know if I have IBS or IBD?

Since IBS and IBD can have overlapping symptoms, start by discussing them with your primary doctor. A diagnosis is a process of ruling things out with a variety of approaches.

If needed, you may be referred to a specialist at the Nebraska Medicine IBD Center. "The IBD Center is a one-stop shop to care for patients with specific issues related to ulcerative colitis and Crohn's disease," says Dr. Eichele. "We offer a multidisciplinary clinic of gastroenterologists, surgeons, pharmacists, nursing, dieticians and psychologists to meet the needs of patients."

Experiencing ongoing gastrointestinal symptoms?
We are here to help. Call 402.559.0264 to set up an appointment at the Frederick F. Paustian Inflammatory Bowel Disease Center.

6 tips for dealing with IBD flare-ups

While you may not be able to prevent flare-ups completely, there are some proactive things you can do to cope.

More than 1 in 10 Americans have irritable bowel syndrome or IBS. Diet can have a huge effect on IBS symptoms, and everyone has different food triggers. Some

11 common IBD symptoms and how to manage them

Receiving an inflammatory bowel disease (IBD) diagnosis and dealing with ongoing symptoms can be overwhelming.