11 common IBD symptoms and how to manage them 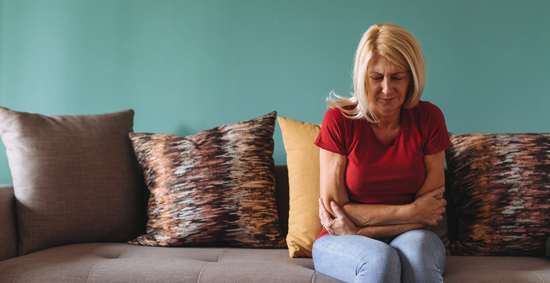 Receiving an inflammatory bowel disease (IBD) diagnosis and dealing with ongoing symptoms can be overwhelming.

While you may be relieved to finally get some answers, coping with symptoms and figuring out treatment options can be daunting. Let's take a closer look at the definition of inflammatory bowel disease and 11 common symptoms of IBD.

Your gastrointestinal (GI) tract has a big job. It's responsible for food digestion, nutrient absorption and waste elimination. When this job is hindered by inflammation, unwanted symptoms and damage can result. Crohn's disease and ulcerative colitis are the two most common forms of inflammatory bowel disease that cause chronic inflammation in the GI tract.

It's the immune system's role to attack foreign invaders like bacteria, viruses and other microorganisms. In people with IBD, the immune system responds inappropriately within the intestinal tract, resulting in inflammation. This inflammation causes the affected GI tract to malfunction, leading to IBD symptoms. Ongoing inflammation in the GI tract occurs in both Crohn's disease and ulcerative colitis (UC), but there are important differences to recognize.

Crohn's disease
Crohn's disease affects any part of the GI tract, frequently the end of the small intestine and the beginning of the large intestine. The disease may appear in patches, affecting some areas of the GI tract while leaving other sections unaffected. Inflammation may extend through the entire thickness of the bowel wall. Crohn's disease symptoms can get worse over time. Crohn's can also lead to anemia – a lack of healthy red blood cells – due to the malabsorption of nutrients when inflammation involves the small intestine.

Ulcerative colitis
UC affects only the large intestine (colon). Inflammation occurs in the surface layer of the intestine lining. Ulcerative colitis starts in the rectum and may spread continuously to involve the entire colon. Like Crohn's, UC can get worse over time and cause anemia due to bleeding.

IBD symptoms can range from mild to severe depending on where the inflammation is occurring. There may be periods when the disease worsens resulting in symptom flare-ups. Medications are prescribed to control the inflammation and induce disease remission. Symptoms may not be the same for everyone, so it's important to be open and honest with your doctor so the right treatment plan can be designed for you.

Ready to set up an appointment at the Frederick F. Paustian Inflammatory Bowel Disease Center? Call 402.559.0264 to get started.

6 tips for dealing with IBD flare-ups

While you may not be able to prevent flare-ups completely, there are some proactive things you can do to cope.

Gut parasite cleanses like ParaGuard: the good, the bad and the ugly

Do you need to deworm twice a year? Or could a parasite cleanse cause more harm than good?

How your gut affects your whole body

The next time you’re feeling down, instead of blaming it on the weather or a stressful day at work, you may want to look at what you’re putting in your gut. An unhealthy gut or one that is out of balance, can increase your risk for obesity and illnesses like diabetes, and can play a small role in depression and colon cancer. Learn more.