Kombucha: What is it and what are its health benefits? 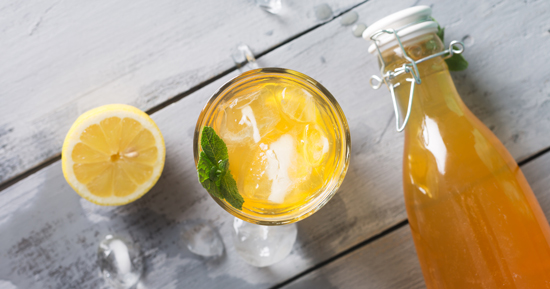 Kombucha is an ancient food dating back to as early as 220 B.C. Some people claim it can help prevent and manage serious health conditions, from blood pressure to cancer. Unfortunately, these claims aren't yet backed by scientific evidence. Valid medical studies of kombucha are limited. Some studies suggest that it may offer benefits similar to other probiotic foods like yogurt. These probiotic benefits include promoting a healthy immune system and relieving stomach and intestinal issues like diarrhea and constipation.

Kombucha is a fermented drink made with tea, sugar, bacteria and yeast. The resulting liquid contains vinegar, B vitamins and a number of other chemical compounds. It is a fizzy, low-calorie beverage that comes in a variety of flavors. Kombucha can be found in the refrigerated section of most grocery stores.

"I describe it as a fruity salad dressing flavor. It's fizzy, like a soda, but also has a slight vinegar taste," explains Nebraska Medicine nutritional therapist Meghan McLarney, RD, LMNT, CDE. "If you don't like the taste, but still want to enjoy kombucha's probiotic benefits, try adding a splash to anything you like to drink or use it as a salad dressing."

"Drinking kombucha is an easy, low-calorie way to add probiotics into your diet," says McLarney. "It's also a good alternative for those who may be vegetarian or can't eat dairy, which means they wouldn't eat other probiotic foods like yogurt or kefir."

Kombucha does contain small amounts of sugar and caffeine. As a fermented beverage, it also contains some alcohol. It's important to always read labels, because the amounts of sugar, caffeine and alcohol in kombucha can vary. According to the Alcohol Tax and Trade Bureau, most store-bought kombucha will have around 0.5% alcohol by volume. By comparison, a typical beer will have around 5% ABV. This means you would have to drink at least 10 servings of kombucha to equal the alcohol content of a single beer.

If you're drinking kombucha that someone else has made, keep in mind that the alcohol content can vary greatly in homemade brews. There is also a risk of food poisoning, even with store-bought kombucha, because it does contain live, active bacteria cultures. That is why proper handling and storage are important.

"In general, it's probably safer to drink kombucha that you get from a trusted source, rather than try to make your own," says McLarney. "If you want to try home brewing, learn from an experienced brewer. Don't just follow any recipe you find on social media."

Anyone at high risk for food borne illness should stay away from foods containing raw forms of bacteria, including kombucha. This would include young children and women who are pregnant or breastfeeding. If you have a weakened immune system, or have had a severe infection or surgery in your intestines, there is a higher risk that bacteria may pass through your gut and cause a blood or whole-body infection.

"For that reason, I also don't encourage probiotic foods like kombucha if you have "leaky gut," colitis or celiac disease," says McLarney. "Also, someone who has unmanaged HIV or has had a transplant involving their gut should be really careful. In those cases, the safest way to get probiotics is from cooked sources such as sauerkraut."

What's the best way to add kombucha to my diet?

If you have specific health or dietary concerns, work with your doctor and a dietitian to determine the best way to add probiotics to your diet. "If you've never tried kombucha, start with a small amount and see how you feel after drinking it for a few days," says McLaren. "If you like it, you'll get plenty of probiotics drinking between 8 and 16 ounces per day."

When it comes to probiotics, I don't necessarily recommend one type of food above others," says McLaren. "Eating a variety is important to avoid super dosing with just one type of bacteria, which could create an imbalance."

If you find that you don't like kombucha, there are plenty of other probiotic foods to try including: yogurt, kefir, aged cheeses, kimchi, pickles, tempeh and sauerkraut, to name a few. And if you're concerned about adding new foods to your diet, the best place to start is by speaking with your doctor or dietitian.

What prebiotics and probiotics are, and the foods that contain them

The human gut is home to a diverse collection of microbes, collectively termed gut microbiota. Your gut microbes help regulate digestion, fight disease and even improve your mood.

According to the National Institutes of Health, almost 1 in 4 U.S. adults are considered low in vitamin D.

If you have diabetes or are pre-diabetic, your doctor may have talked to you about your diet.