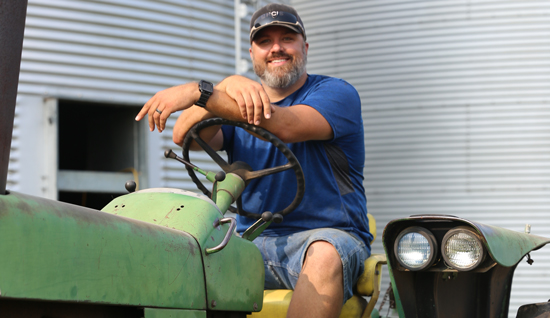 One hundred cattle on about 1,000 acres. And one man – Jesse Heeren – to manage them. Well, with some help from his wife and three kids. "My 2-year-old thinks cattle are the greatest thing in the world," says Heeren.

As a cattle rancher, Heeren is more active than most. But back in college, one wrong play left Heeren with years of pain. Heeren was an offensive lineman for the University of South Dakota when a huge tackle pushed his fingers back to his forearm. "The whole pile landed on my wrist," Heeren remembers.

A month later, he had surgery to put a screw in his wrist, but unfortunately, it never healed properly. Heeren had wrist issues for nearly 18 years. Pain would unexpectedly pop up, and his range of motion was little to none. Heeren's wrist would even warn him of a weather change. "Every part of my wrist would hurt," he recalls. "I would just grin and bear it."

One day, while playing with his daughter, he felt the screw in his wrist pop. At that point, he knew he had to do something. He saw his local doctor, who told him, "Dr. Morgan is the best surgeon in the Midwest. You're going there."

Orthopaedic surgeon Joseph Morgan, MD, specializes in repairing fractures of the hand and wrist, among other complex procedures from the fingertips to the elbow. "One of the most rewarding things about my job is that I get to spend all day trying to get people back to doing what they want to do without any pain," says Dr. Morgan.

Dr. Morgan determined that the scaphoid bone was the source of Heeren's misery. The scaphoid bone is a very small bone with a lot of moving parts around it. "When you fall on your hands, the scaphoid is a common force center. It's also one of the few bones in the body with a retrograde blood supply," Dr. Morgan explains. "Sometimes that piece of bone dies because it doesn't get enough blood. So it can be very tricky to heal."

The team approach to care

When Dr. Morgan met with Heeren, they discussed a range of options: splinting, injections and lastly, surgery. "The other care providers, the patient and I all make up a team," says Dr. Morgan. "We really involve the patient in their own care with decision-making and how we tailor the rehabilitation outcome. Jesse was an awesome team player." Heeren started with a splint. After about six weeks, Heeren decided surgery was worth the risk.

In Heeren's case, the scaphoid bone was painfully rubbing against an adjacent bone, the distal radius. Dr. Morgan explains, "One operation that works well for this condition is to remove the scaphoid bone altogether. It generally takes a bit of their motion, but it gets rid of the pain." The operation's goal is to trick four other bones in the wrist into thinking they were one bone that was broken, and then they heal together.

After the successful surgery, Heeren was in a cast for roughly 10 weeks. "Ice was my best friend after surgery," says Heeren. His wife Brittany was tremendously supportive, bringing him fresh ice and medication.

After the cast was removed, he had better wrist control and motion almost immediately. "My dad had to do the brunt of calving season this year," says Heeren. "But as soon as I got the cast off, I was back to treating calves."

"Jesse had just a phenomenal outcome, with much more motion than I would generally expect," says Dr. Morgan.

His postoperative course was a little bit unusual in that Heeren developed carpal tunnel syndrome. Dr. Morgan did what's called a carpal tunnel release on his wrist. Basically, an important nerve in the hand (called a median nerve) is responsible for the feeling in the thumb and forefingers, as well as the pinch strength of the thumb. If the nerve gets too crowded, it can be squeezed, which puts the fingers to sleep. So the team makes a small incision in the base of the palm and cuts a ligament.

"A carpal tunnel release is the most common operation I do," says Dr. Morgan. "It's like opening the dome on a football stadium. It takes the pressure off the nerve where it can breathe again."

The surgery makes it so the fingers can feel the world around them again, with better pinch strength in the thumb. After his carpal tunnel release, Heeren was right as rain. In fact, he was back to planting corn later that day.

"Jesse worked really hard on his rehabilitation," says Dr. Morgan. "He gets a ton of credit for how well he did. He worked very hard to get the outcome he did and I'm awful proud of his recovery."

"Now I don't have any pain at all," says Heeren, who can finally rope and pull cows around with a strong, stable wrist.

Get personalized treatment for pain
Our orthopaedic specialists help people get moving safely again. Call 800.922.0000 to schedule an appointment.

Powders, pills or liquids – supplemental collagen comes in all shapes and forms. But is it doing your skin or joints any favors?

Back pain: Five questions to determine if you need medical help

Almost everyone will experience back pain sometime in their lives. It’s one of the most common reasons people go to see their doctor.

Osteoporosis is often called the brittle bone disease. About one in two women and up to one in four men age 50 and older in the U.S. will break a bone due to osteoporosis. Learn what you can do to prevent osteoporosis.