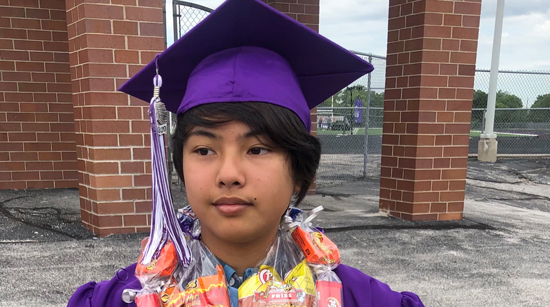 "Her injuries were so severe we thought at one point during the first night she would not survive, or if she did, she would have a poor quality of life," says Lujan’s aunt, Joy Atalig-Richardson.

Lujan was one of two shooting victims critically injured in an attack at the Sonic Drive-In in Bellevue, Nebraska. Two others died.

"Zoey does not remember anything from the night of the incident," Atalig-Richardson says. "She has only recently been told what happened to her and her coworkers and is learning to cope with it."

The crime scene involved an active shooting scene, and a massive fire reportedly set to a U-Haul trailer by the accused gunman.

"It was definitely a chaotic scene. Nothing that I’ve been exposed to before or even been close," Dr. Ernest says. "It’s basically care under fire."

Law enforcement "hot zones" involve a direct and immediate threat to personal safety or health. Typically in that scenario, law enforcement officers must clear the scene before paramedics can safely render aid to the injured. But because of their special training, STacMed members don’t wait. They rush to help those who need it, even in the most dangerous conditions. When timing is critical, they can help with tourniquets to control bleeding or provide other emergency care, such as airway management.

"You rely on your team. It would be highly dangerous if we just sent physicians out into the field with no other protection," Dr. Ernest says. "Part of our training is that we have two law enforcement officers who are both armed. They carry shields and equipment that if I need to provide care, they can be my cover, and they can remain focused on the surroundings to keep us as safe as possible."

Along with Dr. Ernest, Nebraska Medicine EMS physicians Abraham Campos, MD, and Shaila Coffey, MD, also work with STacMed, not only responding to calls in the community but also participating in monthly sessions that involved both medical and tactical training.

Two of the law enforcement officers who participate on the STacMed team were able to render aid to the two shooting survivors that night, including Papillion police officer Chris Goley.

"Nebraska Medicine’s involvement has been instrumental in STacMed’s success," says Goley, "They not only provide us with emergency medicine physicians who serve on the team but also drafted protocols specific to our mission of providing medical care in a hot zone."

Those protocols and that training are credited for saving two lives.

"It was a phenomenal effort to be able to get the results we did," Dr. Ernest says. "I also want to compliment the care provided by the Bellevue Fire Department. They did a phenomenal job taking over care and rapidly transporting the patients to Nebraska Medical Center. I think this really highlights the team-based approach to these types of incidents and shows the importance of the relationships that Nebraska Medicine has with our prehospital partners."

In addition to STacMed, Dr. Ernest also serves as the medical director for the Bellevue Fire Department.

Lujan’s family says Zoey is working hard daily in a rehabilitation center, growing stronger mentally and physically each day. So much has changed since that night.

Emergency vs. Trauma Care: Is There a Difference?

When you or someone you love is seriously injured, Nebraska Medicine has the care you need. Our Level 1 trauma center is capable of treating the most life-threatening injuries among children and adults. Learn more about our trauma care.

Nebraska Medicine Adult Psychiatric Emergency Services is a dedicated space to serving patients experiencing psychiatric distress. The facility will be located on the ground floor of Clarkson Tower on the Nebraska Medical Center campus.

Should I Go to Immediate Care or the Emergency Room?

When you’re not feeling well and you can’t get in to see your doctor, here are some tips to help you decide whether to wait it out, go to the emergency room or visit an Immediate Care Clinic.