This pregnant mom wasn't going to get the COVID-19 vaccine. Until… 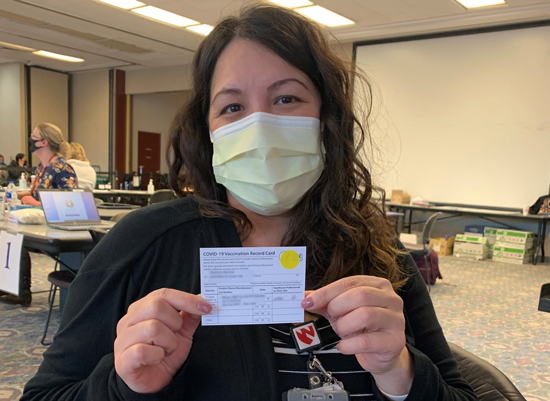 Shahnaz Benner wasn't going to get the COVID-19 vaccine.

Benner says, "Honestly, I thought that the vaccinations were rushed. I'm pro-vaccination all the way, but when you hear about a vaccine being pushed in a matter of months, it just makes you wary. Especially since mRNA vaccines had never been used in humans before."

In August, Benner found out she was pregnant. "I was even more cautious because I was pregnant. It was complicated by the fact that there was no data behind the vaccine's effects on pregnant females. In most research, they exclude those types of populations from research trials."

But then, Benner started to consider it. She works in the emergency room and the Nebraska Biocontainment Unit, so many of her colleagues specialize in infection control and infectious diseases. She says, "When I talked to multiple colleagues, they gave me some sense of relief. They told me there are always risks associated with vaccines and especially with something new. But the benefits outweigh the risks. While working in the emergency room, you don't always know what could be coming through the door." With COVID-19, someone can spread it without showing any symptoms.

She also talked to her maternal and fetal medicine physician Carl Smith, MD. Benner says, "Ultimately after I talked with my OB-GYN, I decided to go through with it. With everything going on with these more contagious strains, I wanted to go ahead and take the plunge."

Benner was 31 weeks pregnant when she got her first dose of the vaccine, saying, "I waited until my third trimester to get the vaccine just so I was a little more comfortable." She had a sore arm within 24 hours and a runny nose a couple of days later. "But it's hard to differentiate if the runny nose is because of the pregnancy or the vaccine," she says. "Ultimately, I felt pretty good."

She also felt a sense of relief. Her dad lives in Alabama and went through chemotherapy last year. Benner hasn't seen him in over a year. He's receiving his first dose this month, which gives her hope. "I want to eventually see him and be more confident in both of our safety." She's glad the vaccines will make that possible.

You asked, we answered: Can mRNA vaccines cause infertility?

I have read that the vaccine causes infertility. That would be devastating. I guess it interferes with the formation of the placenta.

You asked, we answered: Should pregnant or breastfeeding women get a COVID-19 vaccine?

Should those who are pregnant or breastfeeding get a COVID-19 vaccine?

You asked, we answered: Side effects and reactions from the COVID-19 vaccines

What reactions have people had to the COVID-19 vaccine?