How to calculate COVID-19 stats for your area 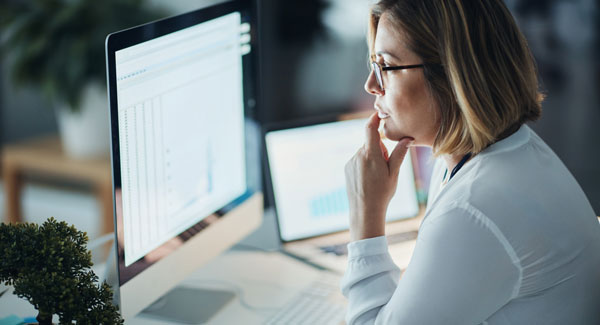 A doctor looks at the level of individuals – how to heal and care for one patient at a time. An epidemiologist looks at a whole group of people – population data for population health. Epidemiology is the study of information based on groups of people. "The only way to know how a disease affects a population is to look at the collective data," says Deborah Levy, PhD, MPH.

Dr. Levy serves as professor and former chair in the Department of Epidemiology in the College of Public Health at University of Nebraska Medical Center. Previously, she spent 20 years as an epidemiologist at the Centers for Disease Control and Prevention.

Below we explain these important COVID-19 statistics so you can think like an epidemiologist. While considering person, place and time, we'll look at:

What it means: The test positivity rate measures both the outbreak's severity and the limitations of testing.

Should it be high or low? A lower positivity rate is better. A decreasing positivity rate means either fewer people are infected or you're testing more of the population.

The WHO recommends a 5% positivity rate or lower. But positivity rates are only valid and accurate if you're testing appropriately and honestly. If COVID-19 outbreaks are surging in an underserved, minority community, but you don't test there, your positivity rate isn't a valid statistic. Because you didn't test in the area you needed to test.

If you go from testing only the really sick people (high positivity rate), then expand the testing (offer many more tests than before), the positivity rate will drop. "If you test lots of people, you should see the positivity rate decrease," says Dr. Levy. "And that doesn't mean that you've reduced how many people have the disease in the population. It means that there's more available testing."

A positivity rate can tell you whether you're getting an outbreak under control – but only if testing is equally available to everyone. The total number of tests should be a good representation of the whole community. Access to testing shouldn't be affected by where you live.

Douglas County positivity rate: How are we doing?

Douglas County has an 10.8% positivity rate as of this writing. That's more than double the recommended 5% or lower.

Lancaster County positivity rate: How are we doing?

Lancaster County has a 9.2% positivity rate as of this writing.

How it's calculated: Take the total number of tests a place has given. Then divide it by the number of people who live in that place.

What it means: How many people – proportionally – have access to testing.

Should it be high or low? Increasing testing helps track the outbreak, so it's good to increase tests per capita. Higher tests per capita keep the test positivity rate low.

When you don't have enough tests available, it's impossible to catch every case. That means there are COVID-19 infections not recorded in the official counts – the question is how many?

Testing needs depend on two things: population size and outbreak size. You need to test more in a city the size of Omaha than a small town. But testing also depends on the size of the outbreak. "Testing should be scaled to the size of an epidemic in an area, not just the size of the population," says Dr. Levy. Since Douglas County has an 11.2% positivity rate as of this writing, testing should increase.

Douglas County tests per capita: How are we doing?

Lancaster County tests per capita: How are we doing? 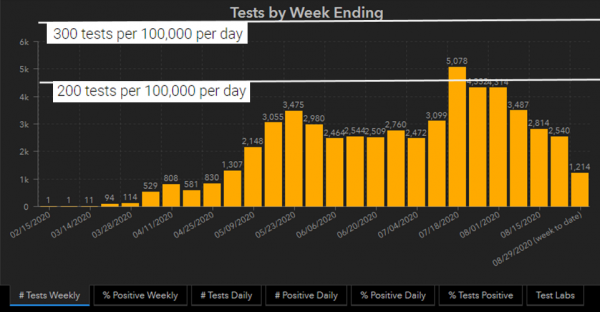 What it means: A case fatality rate tells you how severe a disease is. It also measures how effective treatments are, on average.

Should it be high or low? The lower the case fatality rate, the better.

If more people die from a disease, the case fatality rate increases.

Case fatality rate can't measure how many people have the disease. You can have a growing positivity rate and a declining fatality rate for two reasons:

For example, doctors used to put severe COVID-19 patients on ventilators. But pushing the air through the lungs would sometimes damage the patients' lungs further. Now certain patients receive oxygen up the nose, which gives them a better chance of survival without damaging the lungs. For other patients, the ventilator helps but is dialed down so there's less force pushing the air in. More patients are placed on their stomachs to help them breathe better. As doctors learn how to best treat COVID-19, case fatality rate should decrease.

If hospitals go above capacity, like they did in New York City, the case fatality rate will increase. Even if we know what treatments work better now, we still need enough staff and beds to treat COVID-19 patients.

What about mortality rate?

How it's calculated: Take the number of positive cases in one area (say, Douglas County). Then divide it by the number of people who live in the area.

What it means: How much the disease is spreading, relative to the total population size.

Should it be high or low? Decreasing the positive cases per capita is good.

Douglas County positive cases per capita: How are we doing?

Lancaster County positive cases per capita: How are we doing?

How do epidemiologists do it?

These metrics are a snapshot of the disease in the community – what has already happened. There are also metrics that help you understand how well you are responding to the outbreak. Epidemiologists use the strategy of test, trace and isolate to limit the reach of an infectious disease. A skilled public health response can slow the spread of COVID-19.

Hopefully, this high-level overview gave you a better understanding of COVID-19 statistics. If you're a bit confused, fear not. It takes years of training to understand these fast-moving numbers. Experienced epidemiologists at the UNMC College of Public Health are trained to interpret and apply difficult statistics like these to everyday life. UNMC researchers and Nebraska Medicine doctors continue to provide accurate, up-to-date guidance for everything from meatpacking plants to K-12 schools. We work hard at interpreting COVID-19 statistics so you don't have to.

John Lowe, PhD, assistance vice chancellor for health security, looks at the science behind masks, who should wear them, and who shouldn't as Omaha debates a mask mandate.

Masking for a friend

Nebraskans are good neighbors. Watch this PSA about helping your neighbors and doing your part during COVID-19.

There are plenty of activities you can do without a mask while staying safe. We compiled a list of 78 things to do safely without a mask.